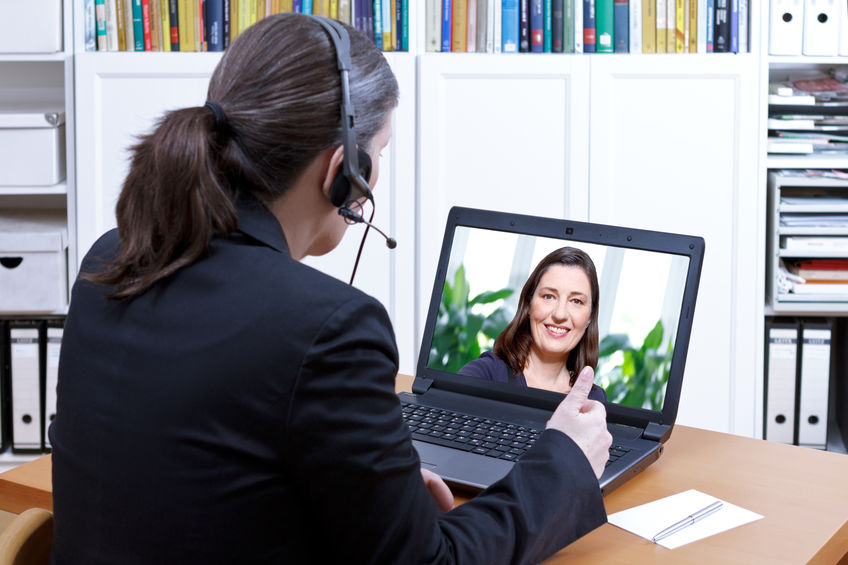 With today’s travel restrictions and social distancing, 90% of interviews are being conducted online with Zoom, GoToMeeting, BlueJeans, or some form of video broadcast. So, have the rules of interviewing changed?

The good news is much of it is the same. You still have to be prepared, now more so than before. Company Information is only a finger tap away. Showing up without knowing details on the company has rapidly become a knockout factor, at a minimum moving you down the rating scale. Since shaking hands (hugging at the beginning of an interview has always been frowned upon) has been eliminated as a greeting or way to connect with someone, we have to think about coming through a computer screen with as strong of a presence as possible.

You need to help the interviewer create connection, to have a conversation. Interviews should always be approached as a dialog, not a monolog. Preparing a list of questions to ask is a mandatory part of the process that I’m surprised most people fail to do. We think how we will respond to questions about our interests, roles and responsibilities, reasons for leaving, compensation expectations. All are important to frame ahead of time.

Questions will help get the interviewer to speak, engaging in the conversation rather than just listening. The interview becomes a tennis match of serve and volley, both parties contributing and responding. No different than visiting with a friend, after a while if only one person is talking, only one person is engaged.

But that’s always been true. What’s different about today’s video interview process? Here are tips for creating a strong online presence to rock the interview.

Cameras can rob you of energy. Resist the urge to lean back in your chair. Resting your forearms on your desk, slightly tilting forward creates a stronger image no matter what role you are being considered for.

Raise your speaking volume slightly. While you want to be conversational and not perceived as a used car salesperson, raising your speaking volume will help you have a better online presence. The weaker our voice is, the lower energy we project. Watching one of the first webinars I presented drove this home. In an attempt to come across casual and personable I spoke in a normal conversational tone. When watching and listening to the recording I was stunned at how low key I came across.

Respond non-verbally when someone is speaking. We have a tendency to stare when watching a television screen. Thinking, processing data, sometimes not even blinking. I think this comes from conditioning us into television watching mode. Remember smile, nod your head…even cock your head gives the interviewer energy coming back at them rather than just a blank stare.

Your recording studio. Another name for your home office or work area. It’s not news that you only have one chance to make a first impression. So, what adds or detracts from the image you are trying to portray during a virtual interview?

What do they see? More than your face will appear in the camera. What is the view behind you? Positioning your computer camera in a manner so there is some color other than a blank wall strengthens your picture. Having a bookcase, wall picture, curtains will make your image become more three dimensional.

Where are you? Don’t be in bed. I sat in a teleconference where someone was laying down, leaning against a headboard and pillows. When they spoke, I was struck by how much the image was robbing him of the credibility he deserved. It was too casual.

Your patio may make a great backdrop, but the birds chirping or a dog chasing the squirrel next door really interferes with whoever is listening maintain their focus. Last week, I was on a call trying to resolve a customer service issue. As valiantly as the representative worked to build credibility with me, the rooster crowing in the background wasn’t helping to create the image that I’m sure they wanted.

Shut the door to the bathroom (or any other room) if it appears in the frame. Straighten bookcases, clean desktops or tables that could appear in focus. Minimize optical distractions.

Control your environment. Tell kids (or your spouse) not to go to the bathroom. Today the computer microphones can be quite sensitive. The last thing you want is for you to be making a homerun point punctuated with the sound of a toilet flushing.

It’s also a good idea to share with all family members that you will be on a locked-down call. No interruptions or disturbances unless blood is spurting or smoke is billowing. I recently heard while an interview was in process, the husband walked by in their underwear. I wish I could have been at the dinner table afterward to hear that debrief (pun intended).

Can you lock the dogs to another side of the house or apartment? While YouTube videos of cats taking command of computer screens can go viral, they don’t serve as a viable addition to the interview process.

Dress appropriately. A coat and tie are no longer mandatory but think of the first impression you want to make. We are projecting into a camera, so we want our strongest look. While a business coat may not be necessary, a shirt with a collar helps square the shoulders. I’ve also found that fabric with small print or squares can cause images to shimmer or give a tiling effect which can be distracting.

Choose something that makes you feel mentally prepared and ready, rather than comfortable. A client was interviewing a candidate with a nice dress shirt and tie. Great image…until they stood up to get something from a bookcase behind them and revealed they were dressed like Tom Cruise in Risky Business, sans pants. Comfort has its limitations to the image we want to portray.

Lighting. I’m not trying to sound like Steven Spielberg or Quentin Tarantino. I’ve learned there are simple ways to portray us in the best possible light. Literally.

Look out for the ceiling light or lamp shooting light from overhead or behind you. The angelic halo that it causes doesn’t come across with an inner glow. It usually robs you of facial expressions and the ability to see your eyes. This is an important part of the virtual interview that is the same as in person. Interviewers are seeking non-verbal cues that generate credibility, trustworthiness, and connection. The eyes and smile are our greatest tools in conveying those traits. Face a window or have a lamp casting light on your face rather than the wall behind you.

Where is your camera? Think about this. Your faces are less than three feet apart. There are only two heads speaking to each other. Position your camera so there is an inch or two of space above your head. I sat in a meeting where the person we listening to only had a forehead, eyes, nose, and mouth. No chin or torso. Most interviewers won’t step into film direction, they just work around it.

As you might have noticed, the mechanics of a virtual interview are the same as in person. Be prepared. Log on five minutes before and wait for the employer to open the room. Ask questions to convey interest. As the interview is closing, express interest by giving specifics on what you feel you could accomplish in the role. Your attitude carries great weight in the selection process.

Biggest tip we can share: relax and be yourself. The suggestions above are mechanics. At the end of the day, it’s your communication style, your experience, and your attitude that separates you from the pack. Have fun and let the camera do its work. You really don’t have to.

Please note: I reserve the right to delete comments that are offensive or off-topic.

Journey with Mike & Nikki as they open doors to show the importance of how a father’s love profoundly impacts his children.

Generate The Business and Income You Want

Have you ever got to the end of a week of heavy calls without much to show for the effort? Making calls IS important - but more important than the number of dials is your daily gameplay to create the exact results you’re aiming for.

Who is Mike Lejeune?

Mike is widely recognized as one of the leading voices in the recruiting industry, with more than 25 years experience in building award winning teams. His ability to inspire and motivate, to help attendees look at the ordinary in extraordinary ways has made him a favorite with business owners and managers, recruiters and trainers. He delivers practical application from real-world, in-the-trenches experience with humor, great stories and a keen ability to extract timeless truths from everyday experiences in each presentation.

Mike is a recruiting industry specialist with more than 25 years in search and temporary & contract staffing.

Mike's path has taken him through six different start-up recruiting ventures in Texas and Oklahoma.

Mike was the winner of the first National Association of Personnel Services 'American Idol of Recruiting Trainers' competition.

Mike jumped into leadership at the age of 23 and built a department of 12 recruiters; generating the highest profit percentage in the company.

Mike was President of many local and state recruiting trade associations.

Mike was President of the National Speakers Association.

Mike is a published author in Fordyce Letter and Staff Digest.

Mike was the co-author of an accreditation program for the Texas Recruiting Association.